Despite the difficult working and living conditions, nursing sisters and other members of the military were able to plan and participate in a variety of social activities.

Teas, dinners, picnics, costume parties, sporting events and regular exercise (dancing included!) were encouraged and enjoyed and provided a break from the strenuous and stressful working and living conditions. 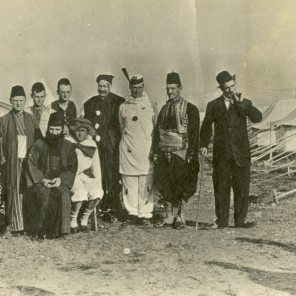 Holidays like Christmas, New Year’s Day and Dominion Day were celebrated and often patients were invited to assist with decorating the hospital ward and taking part in the festivities, which often included special meals.

The letter below was written by nursing sister Louise Newcombe (Class of 1911). She describes Christmas Day 1917, while stationed at Kitchener Hospital, Brighton.

Dear Madam—Will you kindly convey to the members of the Alumnae my sincere thanks for the Christmas cake, which arrived safely and in perfect condition. It is delicious and while we enjoy the cake very, very much it does us even more good to know that we are remembered by the ones at home. So far as I have heard here, the W.G.H. girls are the only ones overseas to be remembered in like manner by their Alumnae. Some of the girls of other schools have received greeting cards, or a magazine, but I think we all agree that nothing could compare with our fruit cakes.

I wonder if you would be interested to know a little about how we spent Christmas here in our small corner?

To begin with, the Sisters mess furnished red and green crepe paper to decorate all the wards and the up-patients did almost all the decorating themselves. They did it well and seemed to enjoy it. They went out into the nearby country and carried home loads of holly—and such holly! Those who are from England will know what the English holly is like. No wonder they used to have festive times here in pre-war days.

Of course each ward carried out its own scheme, and no two were alike. Several made large mottoes for the walls such as “Merry Christmas,” “Good Luck to Our Allies,” “Canada Forever” (a compliment of course to the Canadian staff of the hospital) and on one ward I saw they had one “God Bless the Sisters,” and “Good Luck to You, Old Sport.” That was for their medical officer, who really was a jolly old sport and took it in good part. I fancy it was the work of some of the Canadian patients, as no others would be so unconventional. On Christmas Eve there was carol singing. A Glee Club of some of the Sisters and hospital personnel had been practicing Christmas hymns and old English carols, and on Christmas Eve they went to every block and sang for the patients.

Christmas Day was of course given over to the patients. We have an immense dining hall, where all walking patients had a real good Christmas dinner and some music. In the wards the sick patients had the same dinner and I think most wards had music of some kind that day.

The Sisters provided a real good tea for the patients as their treat, with salad, salmon, fruit jelly, cake and coffee. I was most fortunate, for some of my good Canadian friends sent me boxes for my boys, so I was able to give them real Canadian fruit cake with their coffee, and to each man a package of home-made candy or chocolate, cigarettes, chewing gum, Oxo cubes, playing cards and stationery.

No I think I have written enough to tire you all. I can see you all sitting around the drawing room listening to the Christmas letters from overseas being read at the Alumnae meeting, and in the words of the song “ I want to be there, I want to be there”—but not until we’ve won the war.

Nursing sisters were also entitled to fourteen days off duty for every six months (if possible). As a result, many nursing sisters during their time off explored parts of England, Scotland, Ireland, France, Macedonia and Egypt.

Our party in Cairo, May 1916. [Nursing sisters, including Alfreda Attrill] On special leave granted by Miss Drew.

Nursing sisters that had been overseas for many years were often able to return to Canada on transport duty or were granted furlough in order to visit friends and family at home for an extended period.

Margaret Robertson (Class of 1914) shared her observations about the impact of war in the letter below, while she was on leave in Scotland. The letter was published in the Nurses’ Alumnae Journal, October 1916.